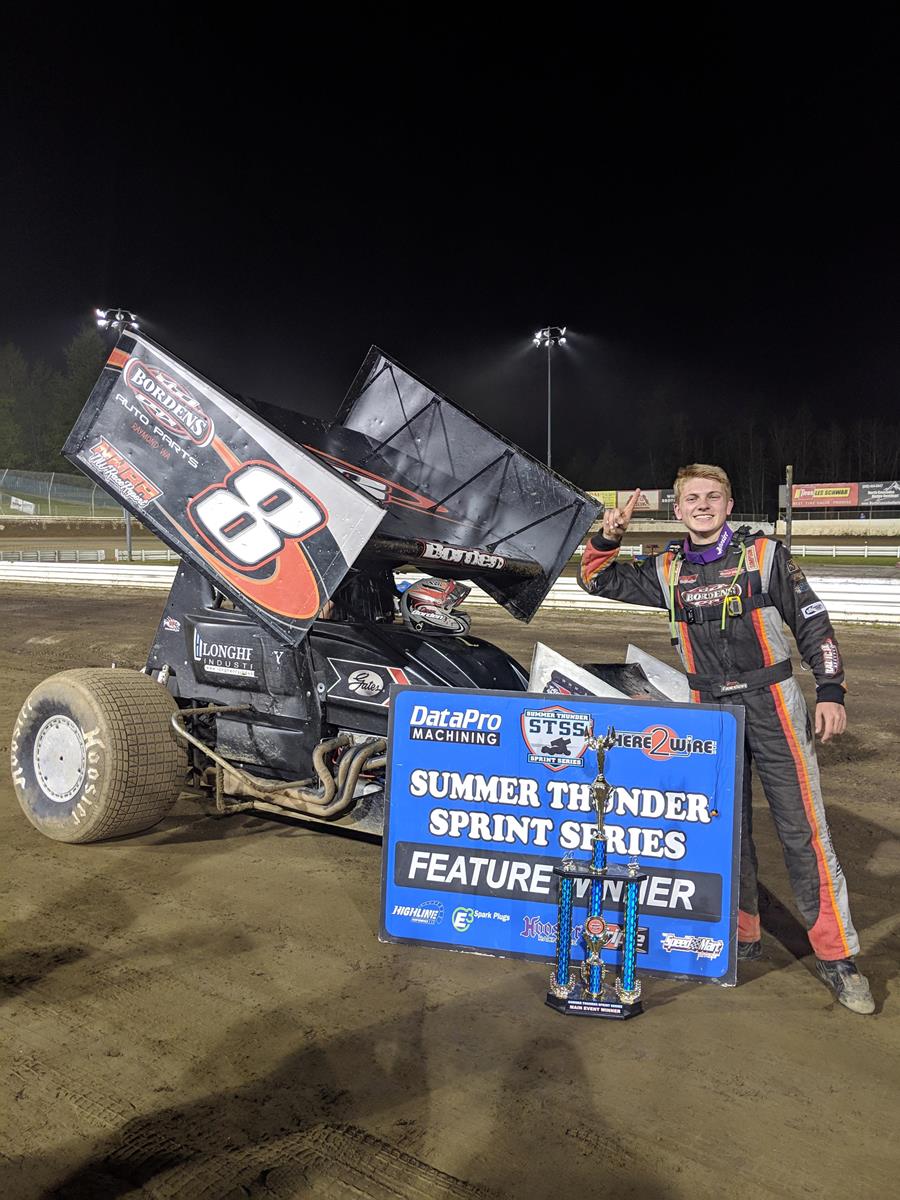 Alger, WA - A picturesque Skagit County evening was punctuated with a win by at Skagit Speedway on Saturday night in the Here 2 Wire Summer Thunder Sprintcar Series by 16 year old Devon Borden, who outraced Jason Solwold for his first win at the track. Joining him in victory lane were Nick Evans in the Midgets and Vance Hibbard in the Outlaw Tuners.

The battle of youth and exuberance versus veteran guile was on from the drop of the green, with Borden setting a lightning fast pace and Solwold searching for speed to match. Borden would lead the pair into slower traffic around lap 9 with Brock Lemley joining the mix, making it a three car battle. Time and again, Borden would make a daring move to advance his lead with Solwold and Lemley both matching it. The breakneck pace continued until a lap 17 caution for Chris Schmelzle in turn three - at the same time, Lemley ended up stopped in turn two, relegating him to the back of the field. On the ensuing restart, Borden jumped to a big advantage, one Solwold was unable to makeup, giving the win to the Raymond, WA teenager, his first at Skagit Speedway and with the Summer Thunder Sprintcar Series. Solwold settled for second - on the year, he has four wins in five races, with a second tonight his only non victory. Cam Smith raced to third. Solwold was the fast qualifier. Heat wins went to Colton Heath, Travis Jacobson and Greg Hamilton. Colton Heath was the Triple X Hard Charger.

Like he was shot out of a cannon, Nick Evans blasted out to an early lead from his outside pole position starting spot to an insurmountable lead in winning the Wicked Energy Gum Focus Midget Series main event. Evans was never seriously threatened over the course of the A Feature. Chance Crum was runner up with Tristin Thomas finishing third. Evans, Greg Thornhill, Hannah Lindquist and AJ Fugitt won the heats.

The never ending Vance Hibbard retirement tour (year 3 now) brought Vance to victory lane on Saturday night. Hibbard took the lead on a lap three restart from Clint Meins and held off challenges from runner up Brian Michelson to secure the win. Heat winners were Hibbard and Howard Vos.