8/8/2022 -
The Budweiser 360 Sprint Cars are back again this Saturday, joined by the NW Focus Midgets, Skagit Aggregates Modifieds and Hornets. Gates open at 5pm 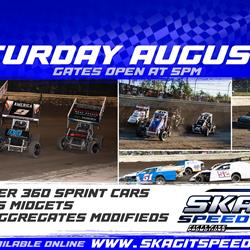 8/8/2022
The Budweiser 360 Sprint Cars are back again this Saturday, joined by the NW Focus Midgets, Skagit Aggregates Modifieds and Hornets. Gates open at 5pm Cars on the track 6pm Opening Ceremonies at 7pm Tickets are available at the gates, online and Cook Road Shell. online...more 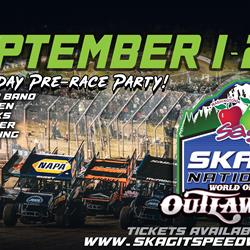 8/8/2022
The World of Outlaws NOS Energy Drink Sprint Car Series will kick off September with more big money on the line at the second annual Sage Fruit Skagit Nationals. We will also be joined by the NW Focus Midgets Series all three nights. One driver will have the chance to take...more 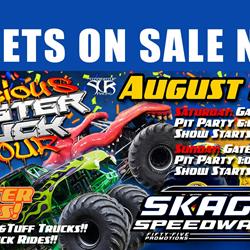 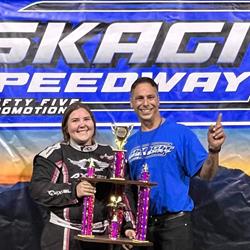 8/7/2022
Alger, WA - Ladies night at Skagit Speedway saw two familiar faces in victory lane and one newcomer. Trey Starks continued his dominance of the Budweiser 360 division while Adam Holtrop continued his in the Hornets. Allison Johnson was the new winner, grabbing her first...more 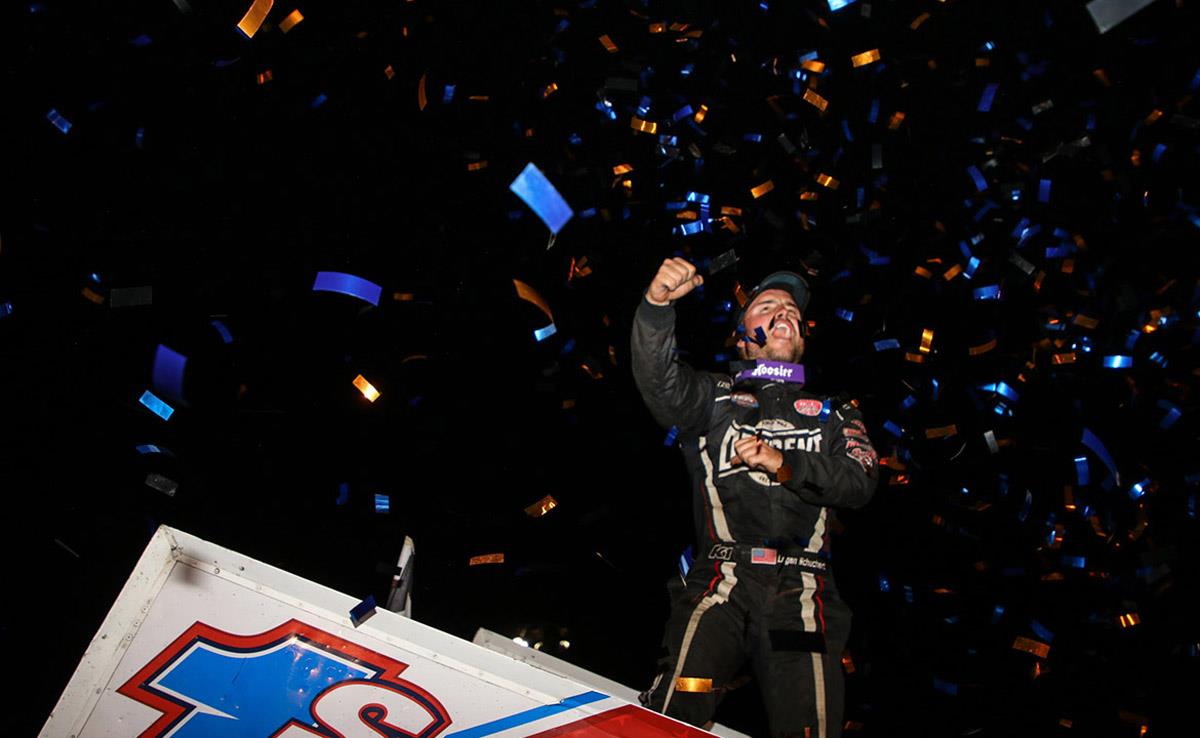 There were three laps go. Schuchart the leader – looking to win back to back World of Outlaws NOS Energy Drink Sprint Car Series races at Skagit Speedway Saturday night. He had led all 37 laps, fending off constant attacks by Brad Sweet.

The yellow and orange flame illuminated the gap under the tail tank.

Schuchart had already dealt with overheating issues, leaking copious amounts of liquid onto the track during an earlier red flag. Luck was trying its best to keep him from winning his sixth race of the year.

The Pennsylvanian didn’t need luck, though. He had speed. Plenty of it.

With a few quick jabs to the throttle the rear end fire was out. The worry of overheating, none existent. When the green flag flew for the final time Schuchart saw nothing in front of him expect the checkered flag three laps later.

He swept the weekend doubleheader at the 3/10-mile. Won the $15,000 payday – $23,000 in total between the two days. Won his sixth race of the season – further surpassing his previous single season win record of four. And broke his grandfather, and car owner, Bobby Allen’s record for most wins in a single season – five.

“If you would’ve told me a couple of years ago or at the beginning of this year you’re going to be winning a couple of races in-a-row and have six wins on the season... you know, I knew it was something we were capable of doing,” Schuchart said. “I’m just really proud of this team. It’s awesome to get big wins like this.”

Friday night he led all 30 laps en route to the victory. Saturday night he did the same, but with 10 more laps. Unlike Friday night, though, where Schuchart stretched his lead throughout the race, Sweet made Schuchart work for his second win at Skagit Speedway.

The start of Saturday's 40-lap Feature was almost a mirror image of Friday night’s race. Schuchart drag raced side by side with polesitter Tim Kaeding down the front stretch on the initial start. The two stayed that way into the corner, but Schuchart, riding the high line, had the better grip. He rocketed by Kaeding for the lead down the backstretch.

While Schuchart pulled away, catching lap traffic on Lap six for the second night in-a-row, Californians Kaeding and Sweet were the show for the opening eight laps. The two raced side by side, lap after lap, corner after corner. Kaeding ran high, while Sweet threw dive bombs to the bottom each lap.

Kaeding eventually put distance between he and Sweet, but a lapped car hindered his run off turn two, allowing Sweet to stay in the throttle and dive underneath him again in turn three. This time it worked for the “Big Cat.” Sweet cleared Kaeding off turn four on Lap eight and began to hunt Schuchart.

It wasn’t much longer before Sweet was to Schuchart’s bumper with the help of a caution on Lap 12 for Kraig Kinser spinning in turn two. However, the Drydene No. 1s car accelerated better than Sweet on the restart and pulled away with the lead by several car lengths. Once Schuchart hit lapped traffic again a few laps later, Sweet was able to make up ground.

On Lap 23 Sweet was close enough to throw a Hail Mary slide job into turn one, sliding up in front of Schuchart by turn two. The Shark Racing driver was ready for it, though. He held his line and charged underneath Sweet on the exit of the corner, making slight contact with the NAPA Auto Parts No. 49 car before reclaiming the lead.

“I tried to cross back underneath him and he kind of blocked me a little bit and we kind of touched,” Schuchart said. “I was just happy to get back by him. As the race went on I felt like I had a line that felt good to me that I could make moves but also defend myself.”

Sweet tried the same move again four laps later, but didn’t have enough of a run this time to put his car in front of Schuchart. He slid up next to the No. 1s car and then watched it drive away down the backstretch. It was the closest he was going to get to trying to pass Schuchart, even with several late cautions.

“We sure did try,” Sweet said. “Every time we timed it pretty good in traffic Logan was able to counter. We made a little contact that one time, but it was all hard racing. I knew I needed to get the lead and kind of went a little too hard and burned up my tire. The track was really aggressive when you’re running high.”

Behind Schuchart and Sweet, Kaeding, Donny Schatz and Daryn Pittman had a fierce battle for third-place. The three drivers traded slide jobs, dive bombs and dueled all race long for the position. Schatz eventually bested the two with aggressive maneuvers to take the spot. Those moves further paid off on a late restart with three laps to go. Schatz snuck his way by Sweet to end the race in second.

“It’s (the season) winding down,” Schatz said. “You want to get the best finishes you can when you can’t win. Logan was obviously really good and set a pretty good pace. I pretty much used everything up getting to that point. It was pretty aggressive up there (on the high side) on the tires. I tried to save as much as I could, but at the end I was sliding and moving around a bit and that’s what got us the spots we got.”

Schuchart had more than a second gap between he and the 10-time Series champion when he passed the flag stand for the final time to pick up his sixth win of the season. His goal at the beginning of the year was to tie his grandfather’s record for most wins in a year. In one weekend he did that and then beat it.

“That’s pretty good,” Bobby Allen said with a grin. “I’m glad for him. He’s doing good. He’s doing a good job of setting the car up. He’s thinking good. Driving good. We had a little trouble at Eldora with the motor stumbling. We think we got that cured and I think that’s helping us because I noticed he took off hard on the restarts and that made it hard for Sweet to slide him on the start. So, I’m happy about everything right now.”

He’s especially happy about winning $8,000 Friday night and $15,000 Saturday night. It goes a long way for the two-car operation.

“It definitely helps,” Allen said. “What we do is we go into the hole pretty deep, Drydene is a big help, but we go into a hole pretty deep, after Knoxville we start paying our bills off. We’re getting close to getting them all paid off and start working on next year.”

To Schuchart, having his grandfather by his side while he accomplishes his goal means a lot to him, he said. The performance he and his Shark Racing team have had this year is exciting, too.

“To say I’m proud of them is an understatement,” Schuchart said. “Everybody from the top down that’s a part of this, that’s helped from the beginning, I know they’re all smiling in Pennsylvania. It’s pretty cool.

“We just want to keep the momentum going. We want to build with it. Keep building this team up to where it can be the best and eventually win a championship. The last couple weeks showed we’re working toward that goal.”

A fire has been lit underneath the Shark Racing team and they want to keep it burning.

As always, if you can’t make it to the race, you can watch all of the action LIVE on http://www.DIRTVision.com.