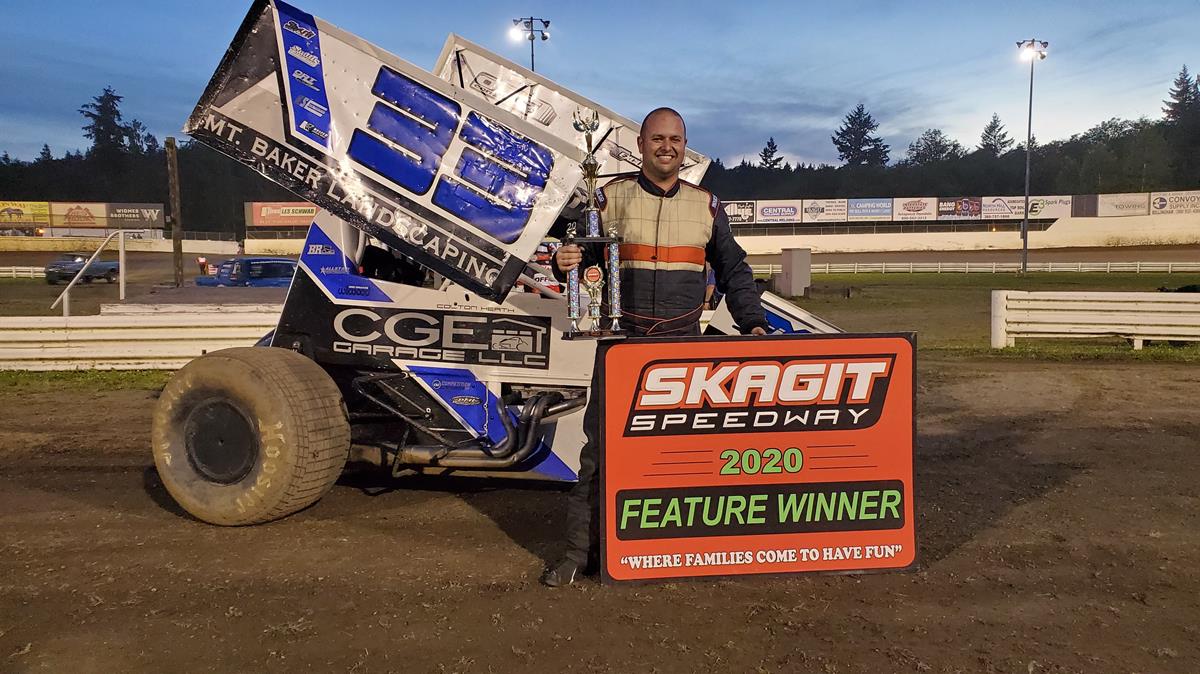 Alger, WA - Two weeks of finishing second by the narrowest of margins was enough for Colton Heath. On the third episode of Thursday Night Thunder at Skagit Speedway, Heath piloted the Law Motorsports #33 to victory lane for the first time in the Budweiser 360 Sprints. Joining him in victory lane on the night were Tyson Blood in the Skagit Aggregates Modifieds and Andrew Schukar in the Outlaw Tuners.

While the past two weeks have featured insane, close finishes, it was the first 15 laps where the action insanity lived this week. Trey Starks led the initial start while Cam Smith and Colton began stalking him as the field rapidly rolled in on the back of slower traffic. The lead changed hands four times before lap 15, with Smith sneaking by Starks on lap 7, Heath passing both of them from the inside of turn four on lap 8, and Starks rallying back around Heath to reclaim the top spot on lap 9. After a couple more volleys back and forth, it was Heath blasting past Starks on the low side of turn three to retake the lead for good on the 14th lap, before a red flag flew for Tanner Holmes. On the restart, with nothing but clean air ahead of him, Heath stretched his legs and began distancing himself from Starks. On lap 18, Tyler Thompson slowed to a stop, making for one last little run to the checkered flag. Heath stretched once again, establishing a one second lead that Starks cut drastically into over the final two laps but could not overcome. At the line it was Heath, Starks and Smith rounding out the top three.

Tyson Blood was simply dominant in the Skagit Aggregates Modifieds. After cruising to a win in the heat race, Blood led every lap of a stop and start main event for his first career modified feature win. Action behind him was intense, with Rick Smith and Devan West ending up filling the podium.

Andrew Schukar’s first trip to Skagit Speedway resulted in a win in the Outlaw Tuner class. Schukar drove underneath Rick Young on lap 5 and rolled away to an easy win from there. Young fought to keep second and Colin Sims collected a career best third place finish.