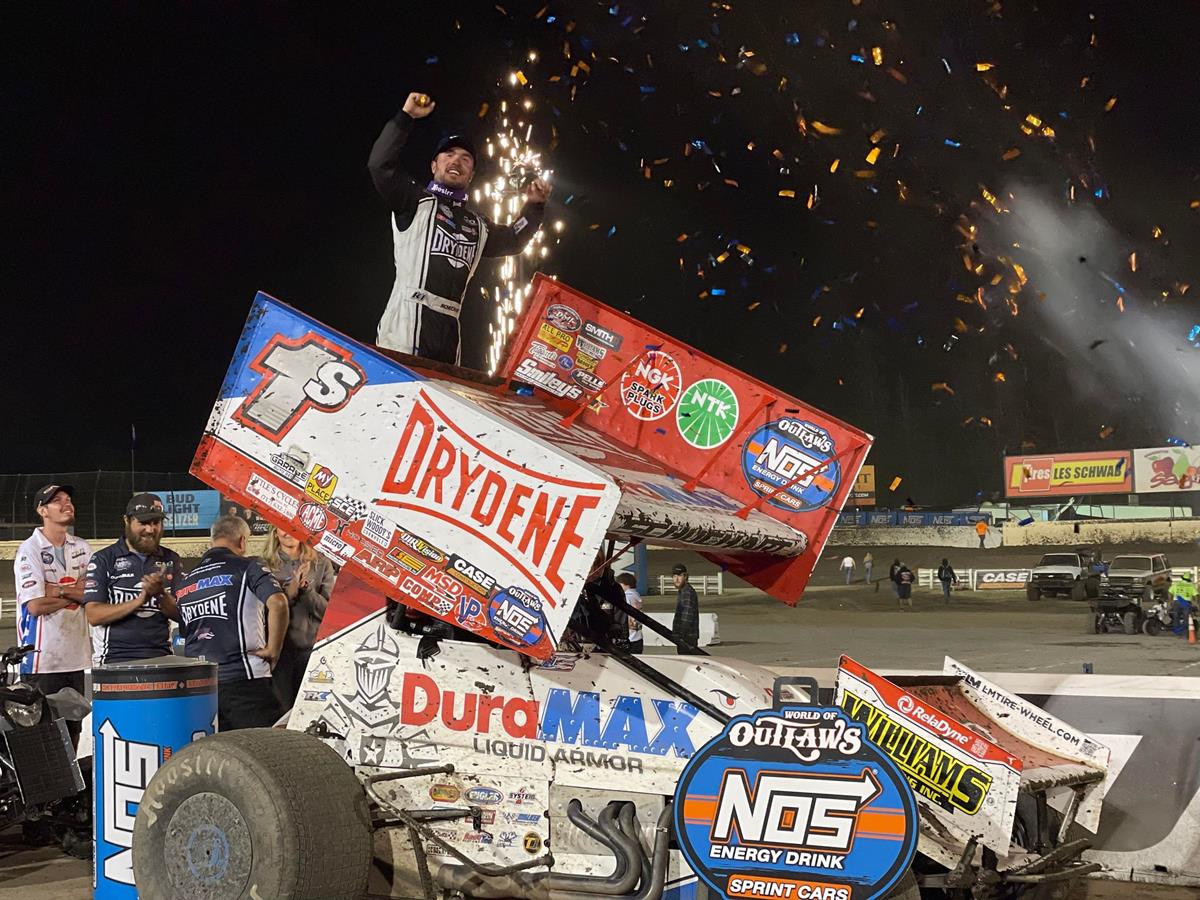 Logan Schuchart opened the 2022 trip to Washington on Thursday night exactly how he ended the 2021 swing with the World of Outlaws NOS Energy Drink Sprint Car Series – in Victory Lane.

While perfecting the middle groove around Skagit Speedway, the Hanover, PA native baited championship leader Brad Sweet into leaving the bottom, capitalizing on Lap 22 to take the lead and stop Sweet’s bid for the fourth perfect night of the season. It was a finish that came down to the wire – proof by the 0.135-second margin of difference at the white flag – as the two stars sliced and diced their way through tight lap traffic.

The Shark Racing, DuraMAX Oil, Drydene Performance Products #1S made one final move on the 30th circuit to seal the deal as Schuchart scored his third win of the season and 33rd of his career with The Greatest Show on Dirt. His third score at Alger, WA’s Skagit Speedway gives him back-to-back wins in “The Evergreen State” to go along with last year’s Grays Harbor Raceway win, where the Series returns on Monday, September 5.

Schuchart will return for night two of the Sage Fruit Skagit Nationals on Friday, September 2 with the chance for back-to-back wins at the Kevin Rudeen & Peter Murphy owned facility, something that hasn’t been done since Schuhcart himself last did it in 2019. All of the action is building towards Saturday’s finale with a $26,000-to-win finale on the line.

“I honestly felt like our #1S was better tonight, but I knew I needed to time the run perfect to get by him,” Schuchart said. “Brad is such a smart driver, so he’s not going to make many mistakes. I knew I would have to capitalize on him being a little conservative, and luckily we did it at the right time. I figured he was getting back to me the last few laps because I could tell the bottom was getting faster, but thankfully we made the right call in traffic and had enough to hold him off.”

After suffering a 32-race drought from April to August, Schuchart and the Shark #1S have now won two of the last four point races at Jackson (MN) Motorplex and Skagit (WA) Speedway. The 29-year-old will have plenty of more chances to add to that over the next week at Skagit, Grays Harbor, and Silver Dollar (CA) Speedway, where he returns as the defending Gold Cup champion.

“I can’t thank my guys enough,” he continued. “Ronald Helmick, Todd Berkheimer, they’re working their butts off. We struggled throughout the first half of the season, but I think we’re building a strong second wind here.”

Finishing second after leading the first 21 laps was Brad Sweet, who fell short of a perfect night by 1.068-seconds at the checkered flag. The Kasey Kahne Racing, NAPA Auto Parts #49 team still managed to expand their championship lead to 70-points over David Gravel as they continue to chase a fourth consecutive World of Outlaws title. Thursday’s P2 effort now bumps “The Big Cat” to nine-straight top-five results at Skagit Speedway, a track he conquered for the first time last year.

“I think Logan was just better than us, all night honestly,” Sweet admitted. “He was able to pace me in the Dash and we tried to make a few changes to get better in the Feature, but he could stay with me so well. I mean he drove right around me even when I was hitting my marks. He was a lot more maneuverable than us tonight, especially in traffic. It was a bit tricky deciphering the grip or slick spots. We’ll come back tomorrow and work on this thing some more.”

Earning his 13th podium of the season and 13th podium at Skagit Speedway was Donny Schatz with a third-place effort in the Tony Stewart/Curb-Agajanian Racing, Sage Fruit, Ford Performance #15. A P3 run extends his mark as the longest active streak of top-10 finishes with his last 12 races averaging a 4.0 finish for the Fargo, ND native.

“I know I got to see a pretty good race unfold right in front of me,” Schatz noted. “I tried to gather it up and get in there to battle with those guys, but we just didn’t have it tonight. We’ll work on it and try to be better.”

Sweet’s closest championship counterparts Carson Macedo (-100) and David Gravel (-72), who are both former winners at Skagit Speedway, closed out the top-five on Thursday night.

Rounding out the top-10 was an eclectic group including Australia’s Kerry Madsen in sixth, Pennsylvania’s Jacob Allen in seventh, California’s Corey Day in eighth, Washington’s Trey Starks in ninth, and Ohio’s Sheldon Haudenschild in tenth.