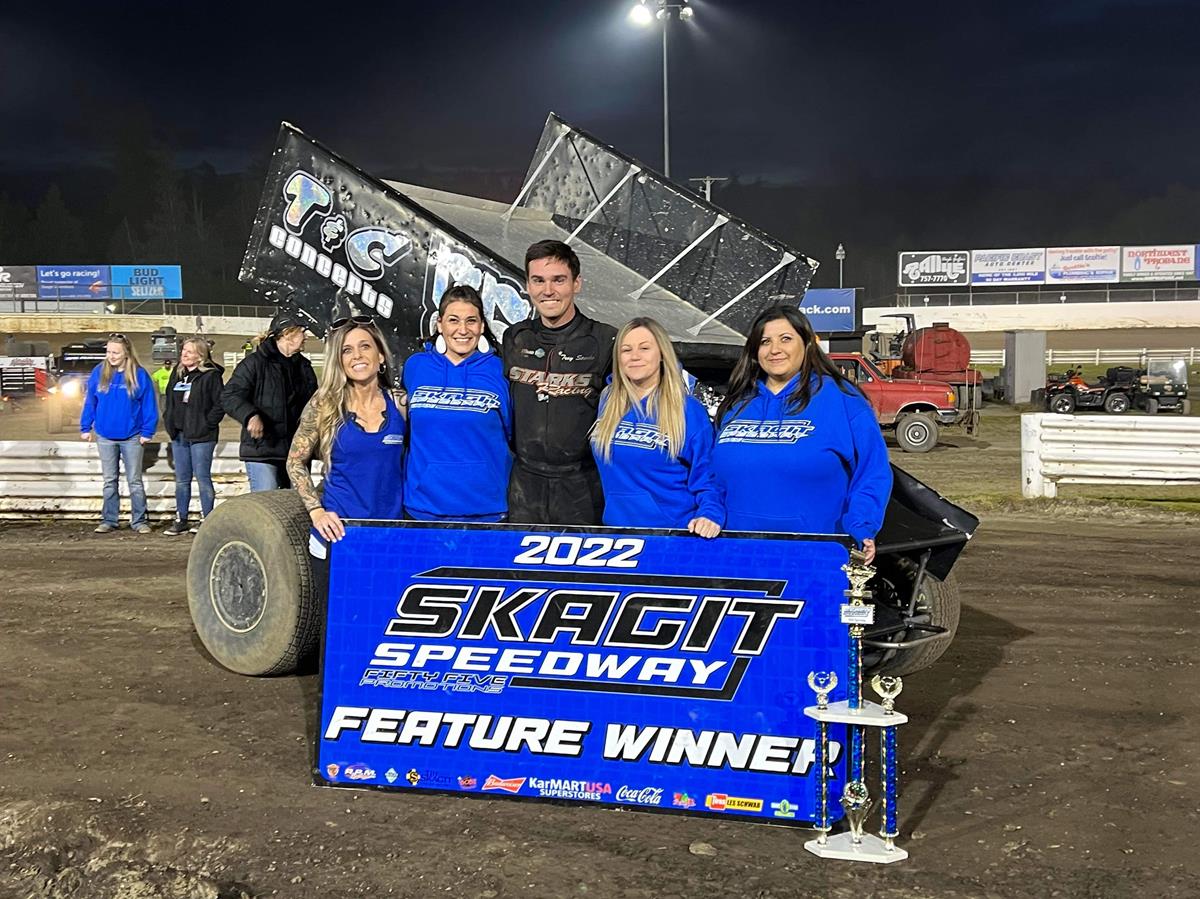 Alger, WA - Trey Starks pulled off the near impossible on the opening night of Skagit Speedway’s 2022 season, running from 24th place to win the Budweiser 360 Sprint A Main on Sunday night. Rick Smith and Brett McGhie joined him as winners on the first night of action.

The epic 30 lap A Main event for the Budweiser 360 Sprints started with Jason Solwold setting the pace and Jesse Schlotfeldt doggedly chasing him through lapped traffic. With a 26 car field starting the main, your lead cars were amongst slower traffic early and often, with the veteran Solwold carving his way past the lappers and the youngster Schlotfeldt matching him move for move. Jesse would sneak by Solwold one time on lap 18, but Solwold used a bold move to split two cars to retake the top spot on the 19th lap. All the while, Starks had been marching way his way up the field, cresting into the top ten from his 24th place starting spot around the half way mark, and using the couple of restarts that happened around lap 20 and 23 to move his way into the top five. Starks would move into second spot by lap 27 when a caution flag pulled Solwold back to the field and gave Trey a chance to start right on his tail. On the restart, Starks found grip up high and drove past Solwold in the upper reaches of turns three and four to take the lead on lap 28, then turned away Jason’s counter punch on lap 29 to secure the win. Solwold’s stunningly good drive ended up just short, relegating him to a second place finish while Greg Hamilton worked his way back up the field to take third. Starks was quick time on the night but suffered technical difficulties in his heat which set him deep into the starting lineup. Heat winners were Schlotfeldt, Brock Lemley and Colton Heath. Hamilton won the dash.

Brett McGhie has been trying for years to come up with a Skagit Speedway win and on Sunday night, the veteran driver pulled it off, leading all 25 laps of the Sportsman Sprint main event for his first triumph. McGhie was never seriously challenged over the course of the race. Youngsters put on great showing to round out the podium, with Jesson Jacobson passing Levi Klatt late for a second place finish and Klatt taking home third in his first sprint car race. Rookie Kai Dixon was the fast qualifier. Veterans Cory Swatzina, Steve Parker and Bill Rude won the heats.

The Skagit Aggregates Modifieds main event saw Rick Smith defend his season title from 2021 by winning the first feature of the year. Smith took over the lead from Zane Miner on lap six and led the rest of the way for the W. Tyson Blood closed and challenged a number of times but ended up runner up, while Geoff Morris finished third in his first time at Skagit Speedway in three years. Heat wins went to Blood and Smith.