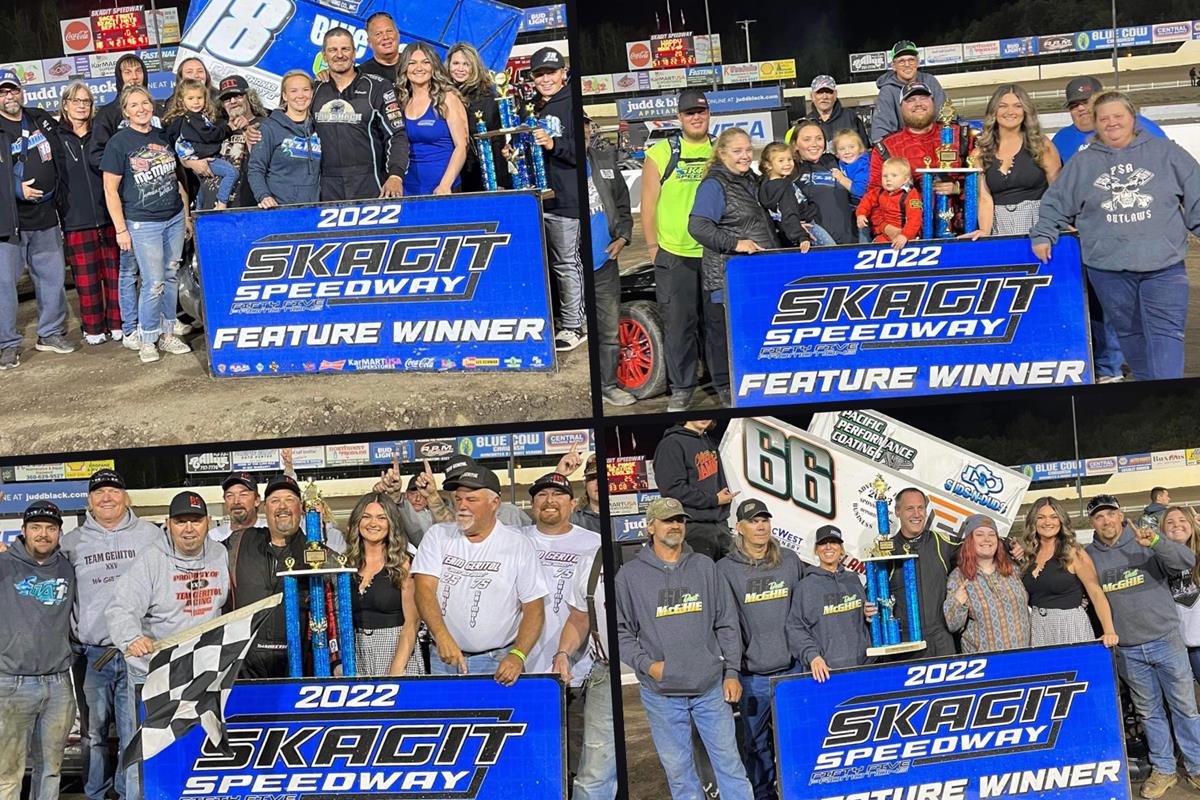 Alger, WA - On the final night of point racing in 2022, four champions were crowned at Skagit Speedway. Three champions capped their year with main event wins, with Brett McGhie, Rick Smith and Adam Holtrop taking the feature win to go with their season title. Chase Goetz played the ultimate spoiler in the 360 division, taking the main event win while Jason Solwold won the track title.

Three different drivers each held the lead twice in the Budweiser 360 Sprints season finale. Jason Solwold led the first six laps before Chase Goetz snagged the top spot from him on a restart. Solwold drove back by Goetz to take the lead on lap eight, while Trey Starks moved himself into contention, driving from his seventh place starting spot to third. Solwold held the lead till lap fifteen when Starks got by him to take the top spot. As Starks went to extend his lead, he encountered mechanical failure, ending his night and handing the lead back to Solwold for a lap 18 restart. Jason looked to be working towards his second feature win of the year when his car lost speed, allowing Goetz to clear him for the lead on lap 25. It was all Chase the rest of the way in taking the win ahead of Colton Heath and Greg Hamilton. Despite whatever slowed him persisting through the checkered flag, Jason kept enough speed to finish fifth on the night and took home the season title in the process for the Shaylen Raye Motorsports team. Trey Starks was the fastest of the qualifying cars, while Solwold won the scramble.

It took six tries to get the Sportsman Sprint main up and running, with attrition playing a huge factor throughout the field. As the checkered flag fell, it was Brett McGhie leading every lap of the main event and securing the season championship in the process. Bill Rude and Steve Vague rounded out the podium. McGhie won the scramble. Malachi Gemmer secured fast time.

Rick Smith finished out his impressive season with another feature win for Team Geritol racing and a season championship to boot. Rick led all 25 laps of the main event without challenge after securing the pole position by winning the scramble. Second went to Ben Gunderson and third was Alan Grimbly.

Adam Holtrop capped off his championship with an entertaining win in the Hornet class. After winning the scramble, Holtrop chased Colin Sims around for four laps before sneaking by him on lap five and held strong the rest of the way for the win. Roger Burt came from dead last to challenge Holtrop late but would end up second while Brian Michelson started second to last and raced to third.