11/9/2021 -
As they say.. ‘Make hay while the sun shines’ The guys are taking full advantage of the weather while we have it and getting the new grandstands all r 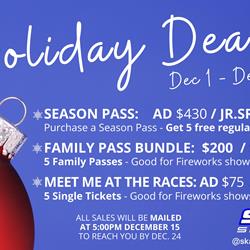 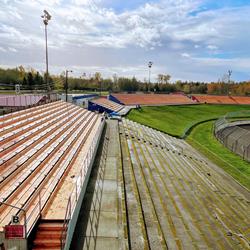 11/9/2021
As they say.. ‘Make hay while the sun shines’ The guys are taking full advantage of the weather while we have it and getting the new grandstands all ready for a spectacular 2022 season! They have just completed the first stage of section B. Sections B, B2, F & G first...more 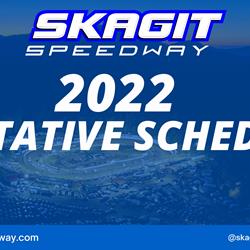 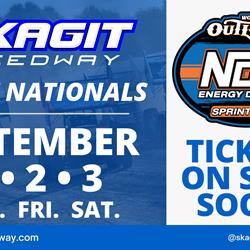 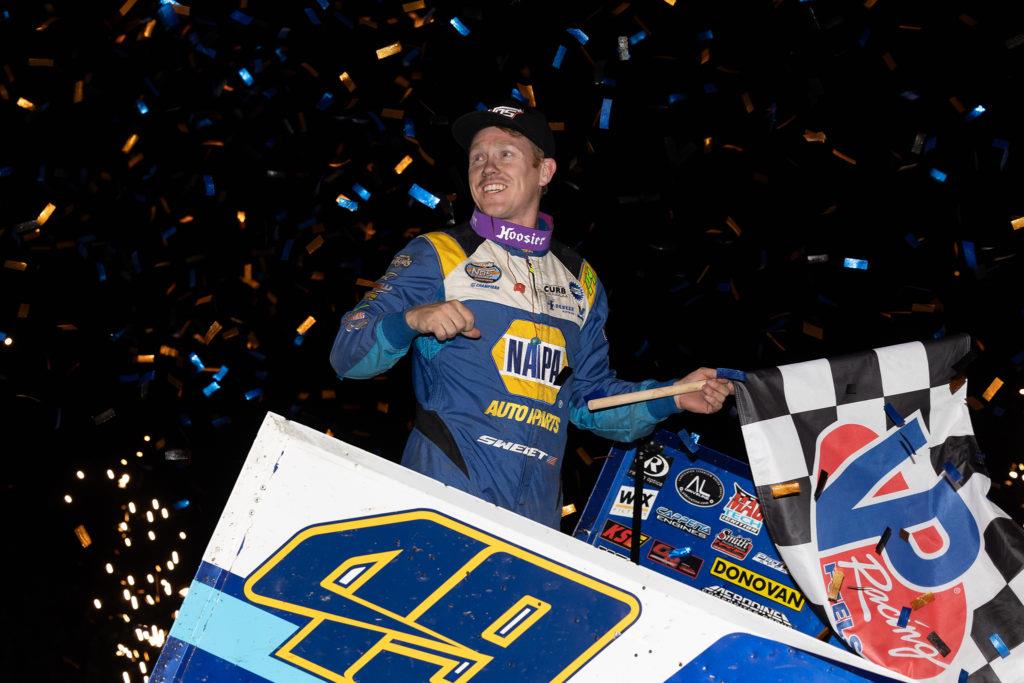 Brad Sweet is making a habit out of conquering the tracks that have haunted him for years.

He finally won at Lincoln (PA) in May; he finally topped River Cities (ND) two weeks ago; and tonight, The Big Cat finally scored a Skagit Speedway victory that has eluded since he made his debut at the track 19 starts ago in 2010.

It was a puzzling path to victory lane filled with lap traffic mayhem and an ever-changing 3/10-mile surface, but it was no task too tall for the NAPA Auto Parts #49. Sweet started third in the 30-lapper, slid by Donny Schatz for second on Lap 12, then drove right by David Gravel for the lead on Lap 22.

The most troubling news for the field in Sweet’s 16th World of Outlaws NOS Energy Drink Sprint Car Series win of the year (double his closest competitor) is his mention that the team, including Eric Prutzman, Joe Mooney & Andrew Bowman, “found something they’ve been missing over the last few weeks.”

Saturday’s Skagit score, which marks wins at 42 different tracks with The Greatest Show on Dirt, brings Sweet to 74 career wins and leaves him only 10 away from reaching Stevie Smith to crack a legendary top-10 on the All-Time Wins List.

“I’ve always loved coming to Skagit,” Sweet told the fans. “We’ve got a great crowd and a great track this weekend. We’ve always been close here but seemed to finish second or third and just miss that little extra bit in the late going. I think we found something tonight, though. I could move around and get through traffic really well, and that’s what wins or loses these races. I felt like I could do things that I haven’t been able to do in weeks with this setup.”

Halted by only one caution on Lap 8, Saturday’s 30-lapper was full of thick, tight, and troubling lap traffic. After earning a Series-best ninth pole position, Gravel jetted away to a 2.194-second lead at the halfway mark, but then traffic got tricky.

Once Sweet cleared Schatz for the second spot, he quickly caught Gravel and applied pressure with the #2 struggling to make moves on the backmarkers.

The winning move came on Lap 22 when Sweet aced the bottom of turns one and two and rolled right by Gravel, who was pinned on the high side. The #49 machine immediately checked out and ran to the win unchallenged over the last eight laps, but things got wild for the runner-up position as Gravel, Schatz, McFadden, and Haudenschild went wheel-to-wheel under a blanket and in traffic on the narrow 3/10-mile.

Ultimately, Sweet took the checkered flag ahead by 2.336-seconds.

“Sometimes it’s easier to be in second at a track like this,” Sweet noted. “It’s so much fun to race with guys like David, Donny, and everyone on tour right now. This is the toughest the World of Outlaws has been I think. Hopefully, we can come back tomorrow and get us $25,000.

Sweet now only has four tracks with 10+ starts and zero wins: Williams Grove (PA), The Dirt Track at Charlotte (NC), Thunderbowl (CA) Raceway, and Tri-State (IN) Speedway. He’ll have a shot at the first two later this fall.

Capitalizing on the wild lap traffic action, Donny Schatz clawed back from fourth and ended up second in Saturday’s 30-lapper. He’s up to eight consecutive top-four finishes aboard the Tony Stewart/Curb-Agajanian Racing, Ford Performance, Carquest #15.

“That was a high-speed chess match,” Schatz said. “The car feels solid, so I think we should be good for tomorrow’s big show.”

After leading the opening 21 laps, David Gravel of Watertown, CT slipped back to finish third-place for the third-straight race. He slipped back to fourth at one point amid the lap traffic chaos but recovered nicely for his 20th podium of the year in the Big Game Motorsports #2.

“It’s a bummer to draw the one on back-to-back nights with zero wins to show for it,” Gravel admitted. “We got better today, so hopefully we’ll find a little more tomorrow with $25,000 on the line.”

Rounding out the top-1o on night two of the Sage Fruit Skagit Nationals was Carson Macedo (6th) in the Jason Johnson Racing #41, Logan Schuchart (7th) in the Drydene Performance Products #1S, Brock Zearfoss (8th) in the Moose’s LZ Bar & Grill #3Z, Kasey Kahne (9th) in the Beef Packers #83, and Rico Abreu (10th) in the Rowdy Energy #24.

UP NEXT (Sunday): The World of Outlaws NOS Energy Drink Sprint Car Series will return to Washington’s Skagit Speedway tomorrow, September 5, for the $25,000-to-win finale of the Sage Fruit Skagit Nationals. On Labor Day,